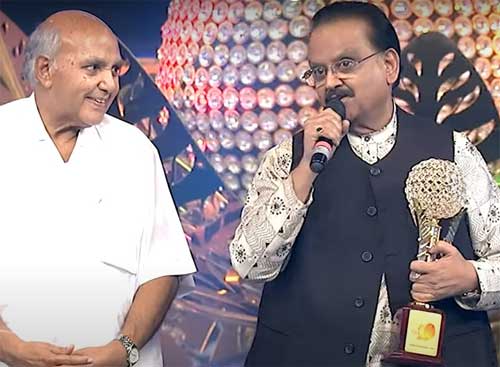 Fans of legendary singer SP Balasubrahmanyam are yet to digest the fact that he is no more. The legend breathed his last at MGM Healthcare in Chennai after a prolonged battle with COVID-19. SPB’s funeral is being held at his farmhouse on the outskirts of Chennai with full state honours.

Meanwhile, an old video, in which Balu was speaking at ETV’s 20th anniversary celebrations, has been going viral on social media. In the video, in the presence of Eenadu Chairman Ramoji Rao and Megastar Chiranjeevi, Balu recollected how Ramoji Rao’s humility had floored him many years ago.

Balu said that he always used ETV’s car whenever he lands in Hyderabad. One day, before his flight to Hyderabad, Balu called up a few people at ETV so that they could arrange a car to receive him at the airport. However, Balu got no response from anyone. He then managed some courage and called up Ramoji Rao’s residence directly.