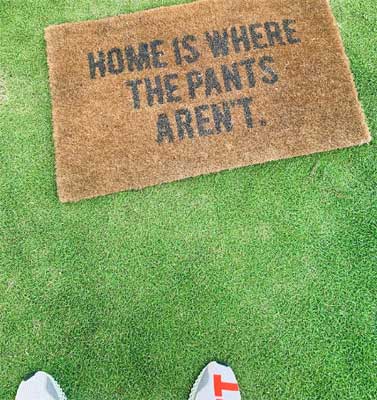 They say that home is where the heart is. But this proverbial saying has been given a new twist by hero Naga Chaitanya, or, we must say, Chay’s doormat. The actor took to Instagram this morning and posted a picture of his doormat, with the caption, “And the door mat of the year award goes to…”

And the quote on the doormat reads, “Home is where the pants aren’t.” Chay clicked the picture in his garden and was wearing sports shoes. Perhaps he was working out or relaxing after a workout session. And he chose his doormat to convey this interesting yet hilarious message.

On the work front, Chay had resumed Love Story’s shoot a few days ago. He will move on to Vikram Kumar-Dil Raju’s Thank You next.

And the door mat of the year award goes to …