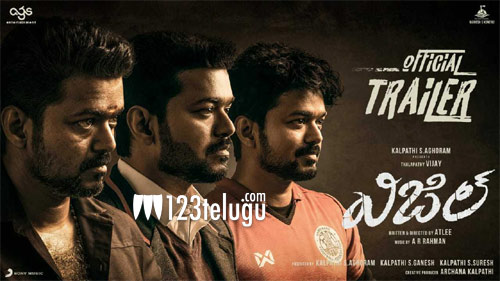 The Telugu theatrical trailer for Tamil star Vijay’s upcoming Diwali entertainer, Whistle (Bigil in Tamil) is out just a while ago. The Telugu version’s trailer is an exact replica of its Tamil version and even the powerful impact created by the Tamil trailer is recreated quite well.

Whistle is a sports drama with women’s football backdrop. Vijay enthralls fans in two different avatars, a football coach and gangster. There is also a speculation that Vijay will be seen in another role, of a champion footballer, in the movie.

Whistle has Nayanthara playing the film’s female lead. The film is directed by Atlee and produced under AGS Entertainment banner. Mahesh Koneru is presenting with Telugu version. Whistle is opening in cinemas on October 25 along with its Tamil version.