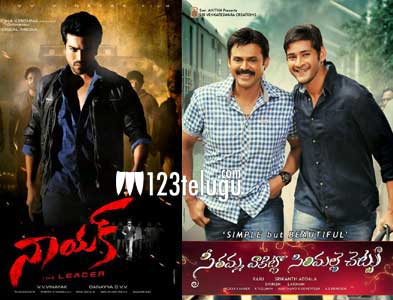 For Telugu films, Sankranthi is one of the most lucrative season of the year. People of all sections of the society throng to the theaters to catch any movie that is available. Competition is therefore naturally going to be intense between films that release during this time. For 2013, we have two biggies in the fray – Naayak and SVSC. A host of other small films are also expected to join the race soon.

For Sankranthi 2012, Victory Venkatesh and Mahesh Babu competed with each other with their respective films ‘Bodyguard’ and ‘Businessman’. This year however, they will fight together with ‘Seethamma Vakitlo Sirimalle Chettu’. Mega Power Star Ram Charan will be entering the fray with his mass entertainer ‘Naayak’.

Which film will capture the hearts of movie lovers out of these two? We can never know until people pass their judgement. But for now, let us hope that both these films do well at the Box Office during Sankranthi 2013.