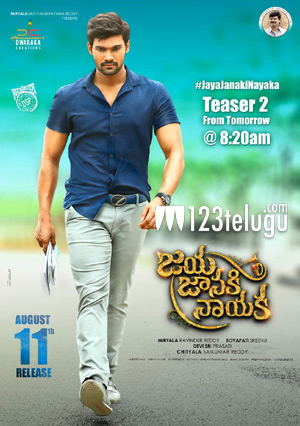 Mass action entertainers’ specialist Boyapati Sreenu surprised everyone with the first teaser of his upcoming romantic action drama, Jaya Janaki Nayaka, last week. The film’s second teaser will be out at 8:20 am today.

Naturally, everyone is expecting Boyapati to come up with yet another surprise with the second outing. Whether Boyapati will follow up the first teaser with a high voltage action-packed teaser or again stick to light-hearted romantic teaser will be known tomorrow morning.

Bellamkonda Sai Srinivas, Rakul Preet and Pragya Jaiswal are the film’s main leads. JJN is produced by Miryala Ravinder Reddy. The film is slated for its release on August 11.