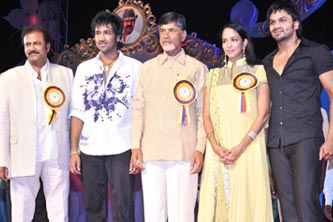 TDP Chief Nara Chandrababu Naidu is all set to become the first Chief Minister of the residual state of Andhra Pradesh. The former CEO of AP is now going to try and bring in big investments for the news state and part of the plan is to attract investments from the Film Industry also.

Chandrababu and the TDP have good relations with many people in the Film Industry. Chandrababu might use those connections to get the Industry to set up some facilities in the region. But how far will he succeed in this matter?

KCR has already vowed to keep the Film Industry in Hyderabad only. Both regions are expected to give sops to the Industry, in a bid to attract them. We will have to see how this goes.