Will Chiranjeevi-Pawan Kalyan multi-starrer be ever made?
Published on Jul 5, 2018 4:08 am IST 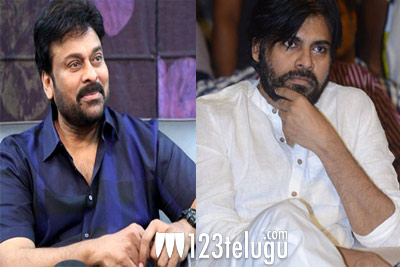 During his speech at Tej..I Love You’s pre-release event last night, veteran producer Allu Aravind announced that he will surely produce a multi-starrer featuring both his brothers-in-law Chiranjeevi and Pawan Kalyan. Needless to say, fans of Megastar and Powerstar are thrilled with Allu Aravind’s announcement.

However, fans are also wary of the fact that a multi-starrer featuring both Chiru and Pawan was announced a year ago, but there has been no further update on that protect till date. Senior filmmaker and politician T Subbaramireddy was supposed to bankroll the project in Trivikram’s direction, but the project seems to have been shelved.

Chiru is currently working on Sye Raa, and he also has a film with Koratala Siva next. On the other hand, Pawan will be busy with his political commitments at least until the 2019 general elections. In this scenario, will the Mega multi-starrer be ever made in immediate future?