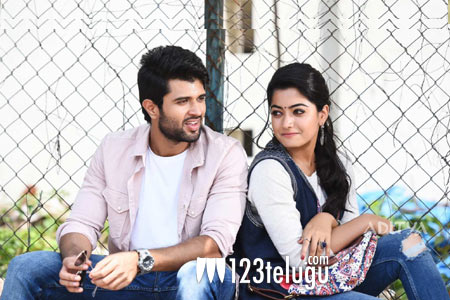 The posters of Geetha Govindam created a good buzz for the film. Things got heated up when the first single of the film, Inkem Kavali released and became a chartbuster with 1 crores views in no time.

As the teaser will be released this Sunday, there is a lot of expectations on the film. Firstly, it is Vijay Devarakonda’s immediate film after Arjun Reddy and it will be very interesting to see what kind of a role will he be seen in this film.

By the looks of it, the film is romantic-comedy filled with good emotions. The teaser of Arjun Reddy created a massive impact and gave the film a big boost.

Will Geetha Govindam do the same for Vijay, we need to wait and see. Rashmika plays the female lead in this film which is being directed by Parasuram.