It’s been earlier reported that a prequel to the Baahubali franchise, titled Baahubali: Before The Beginning, is being made as an original Netflix series. The series will be made in 2 parts. Popular Tollywood directors Deva Katta and Praveen Sattaru are helming this massive project, while Arka Media Works, the production house that produced the Baahubali franchise, is producing the Netflix series as well.

Recently, Netflix’s official website announced that the first season of Baahubali: Before The Beginning will be streamed in 2021. Needless to say, 2 years from now on is a pretty long wait for all the fans of the Baahubali franchise.

However, a source close to the development has informed us that a major part of the shooting has been wrapped up and that fans can expect to watch the series much before than what has been announced. The first season will have 9 episodes. The series is based on the book ‘The Rise of Sivagami’ authored by Anand Neelakantan. 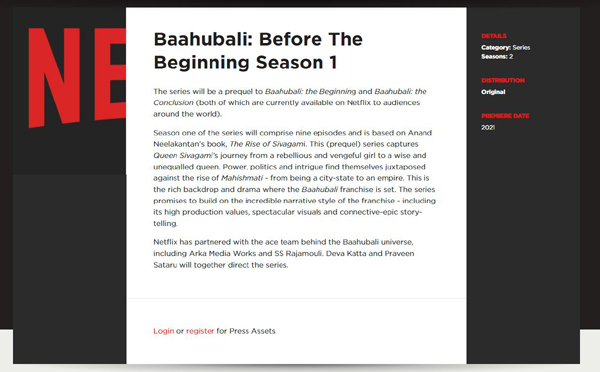