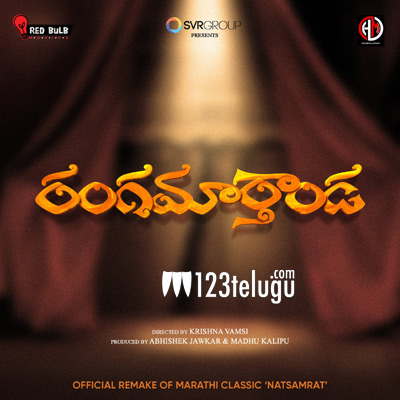 Director Krishna Vamsi is hailed as a creative director and had given several memorable hits in the past. However, he has been waiting for a solid hit which will bring back his past glory. His previous film, Nakshatram, was a debacle at the box-office.

Last night, after being in the news for several months, Krishna Vamsi’s new film, Rangamaarthanda, an official remake of the blockbuster Marathi drama Natsamrat, had its formal announcement. The Telugu version will see Prakash Raj and Ramya Krishna reprising Nana Patekar and Medha Manjrekar’s roles.

To be produced by Abhishek Jawkar and Madhu Kalipu, Rangamaarthanda’s regular shoot will commence from December. It remains to be seen if Krishna Vamsi will bounce back to form with this emotional family drama.