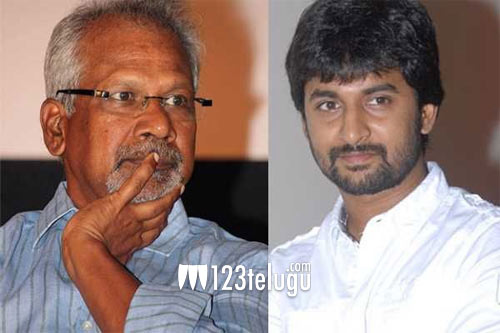 That hero Nani is a huge fan of legendary auteur Mani Ratnam is a well-known fact. In the past, Nani was supposed to collaborate with Mani Ratnam for a multi-starrer, also featuring Dulquer Salmaan. Unfortunately, the project was shelved due to reasons unknown.

Now, if the latest buzz in Kollywood circles is anything to go by, Nani has been approached for a crucial role in Mani Ratnam’s ambitious historical drama authored by Kalki, Ponniyin Selvan. However, this a mere speculation and we will have to wait until it turns out to be true. If everything falls into place, this project will fulfill Nani’s long-cherished dream of working with Mani Ratnam.

On the other hand, Ponniyin Selvan will feature an ensemble cast comprising Amitabh Bachchan, Aishwarya Rai Bachchan, Vikram, Jayam Ravi and Vijay Sethupathi in key roles. Let’s wait for an official announcement regarding this massive project.