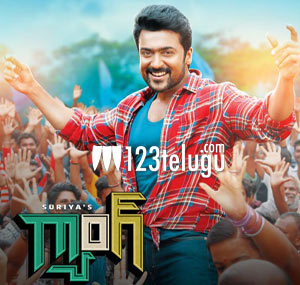 Suriya, Keerthy Suresh starrer Gang is all set to hit the screens in a few hours from now. Directed by Vignesh Shivan, the film is being released by UV Creations and Studio Green banner.

While the film has got limited screens in the two Telugu states compared to the two other biggies, buzz is that it could turn out to be the dark horse in the Sankranthi race at the box-office. Already, the film’s premiere in Dubai has gotten good response and many praised the entertainment factor in the film and Suriya’s performance as per the latest reports.

It’s going to be a crucial film for Suriya, considering that his recent films like Singham 3 and 24 didn’t quite turn out to be huge hits. The actor has been promoting the film a lot in both Telugu and Tamil, and now it remains to be seen if Suriya’s efforts will pay off or not.