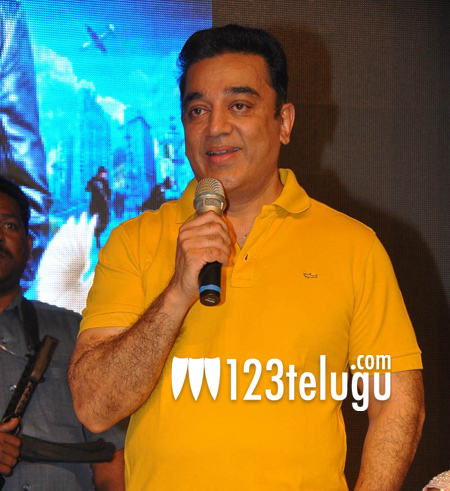 Ulaganayakan Kamal Haasan had some interesting comments to make during the audio launch of the Telugu version of his upcoming mega budget film ‘Vishwaroopam’. The film is all set to premiere on DTH (Airtel, Tata Sky, Sun Direct etc) on the night of January 10th, a day before its theatrical release on January 11th.

Addressing the concerns of the theater owners, Kamal Haasan said “We have Lord Venkateshwara calendars at home. But will they stop us from going to Tirupati?Any day, a theater is the first and most important priority of actors and producers. But we are trying a new mode of distribution that will be beneficial for the industry and everyone connected to it.”, he said.

Kamal Haasan is known for going against the tide and he has never been afraid to try something new. If the DTH experiment works out successfully, it will pave the way for new and radically innovative approaches in movie distribution. The audio launch was attended by Dr. D. Ramanaidu, Dr. Dasari Narayana Rao and S.S.Rajamouli. All of them wished Kamal the very best for his project.