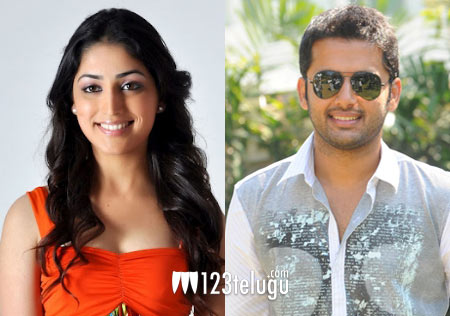 Yami Gautham is going to join the cast of Nithin’s upcoming film Courier Boy Kalyan. Prem Sai is directing this film and Gautham Menon is producing it on Photon Kathas banner. The film went on floors few months ago and there were rumours that Abhinaya was going to play the lead role and then the makers approached Richa Gangopadhyay; however, neither of them shot for the film.

Prem Sai told a leading newspaper that he had approached Yami Gautham couple of times earlier as well, but she couldn’t join the film because of her prior commitments. Her other bilingual film Gauravam is going to be wrapped up soon and she’ll soon begin shooting for E Nivas’ Aman Ki Aasha. As soon as Yami realized that she had dates to allocate for Prem Sai’s film, she agreed to play the lead role in this romantic comedy. Karthik is composing the music. The film is being shot simultaneously in Tamil with Jai in lead role. More details about the film will be announced soon.