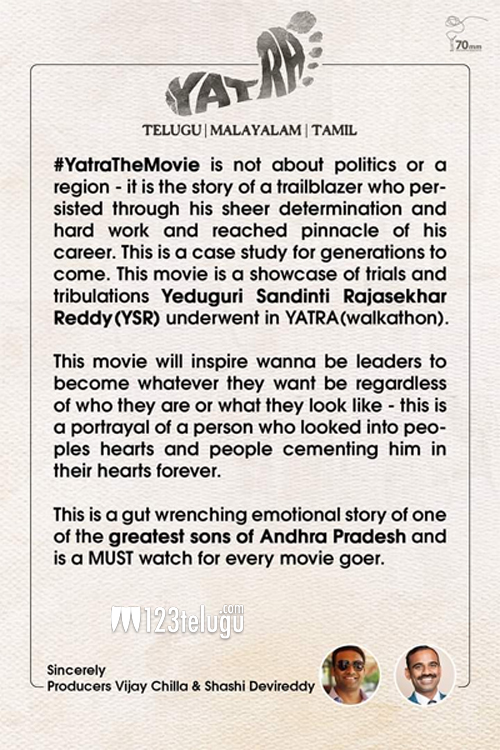 After the back-to-back successes of Bhale Manchi Roju and Anandho Brahma, producers Vijay Chilla and Shashi Devireddy are eagerly awaiting the arrival of their third production, Yatra. This semi-biopic on former Chief Minister of erstwhile Andhra Pradesh YS Rajasekhara Reddy is hitting screens in a few hours amid an overall positive buzz.

Meanwhile, Vijay and Shashi have penned an important note just ahead of the film’s release. They said that Yatra is not a movie about politics or a particular region, but it’s the story of a trailblazer who reached the pinnacle of his career with his sheer determination and hard work. Yatra will showcase the trials and tribulations YSR underwent in his Padayatra.

“This movie will inspire wannabe leaders to become whatever they want to be. This is a portrayal of a person who looked into people’s hearts and people cementing him in their hearts forever. This is a gut wrenching story of one of the greatest sons of Andhra Pradesh and is a must watch for moviegoers,” said Vijay and Shashi.