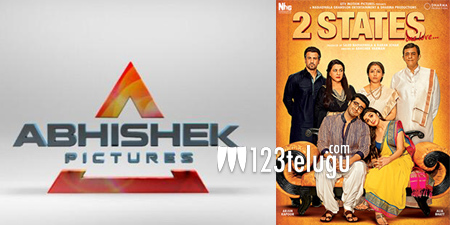 Continuing with the trend of remaking Hindi hits in Telugu, yet another film which will soon be remade in Telugu is none other than the Arjun Kapoor starrer Two States.

News is that noted production house, Abhishek Pictures have bagged the remake rights of the film. Two States was based on the hit novel with the same name written by famous writer Chetan Bhagat.

Two states was a runway hit in Hindi and collected over 100 cores at the box office. Based on a couple who are from two different states this film has a universal theme and can be set nicely in Telugu as well.

Even though an official confirmation is yet to be made this news has created a huge curiosity all over. It would be really interesting to see who will be cast in this unique love story and which director will helm it.