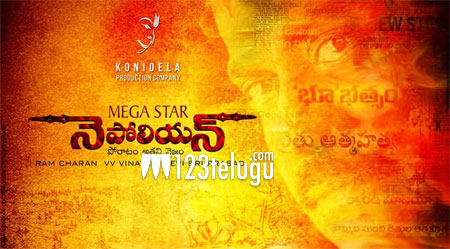 Megastar Chiranjeevi’s most prestigious 150th film has been the talk of the town ever since Chiru announced his comeback to silver screen. For several months, Kathilantodu was said to be the film’s title, but Ram Charan clarified that the title has not been confirmed yet.

Charan’s revelation led to several more reports about the film’s title as media houses started circulating a few interesting titles like Khaidi and Khaidi No.150. The latest title to join this speculation is Napoleon, with a tagline Poratam Athani Naijam.

We will have to wait for an official confirmation in this regard. Keep watching this space for more.