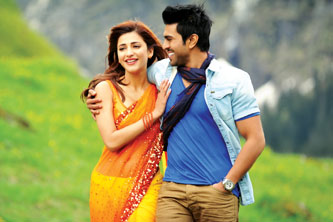 The audio album of Mega Power Star Ram Charan’s ‘Yevadu’ has been postponed to July 1st. The event was scheduled for Sunday, June 30th. The function will now be held on Monday and members from the Mega Family are expected to attend the launch ceremony. Devi Sri Prasad is the music director for the film.

Charan will be seen with Shruti Haasan and Amy Jackson in this movie. Vamsi Paidipally is the director of the film and Dil Raju is the producer. The film is gearing up for a possible release in the last week of July.

‘Yevadu’ is expected to be a thriller and Stylish Star Allu Arjun will be seen in a cameo role along with Kajal Aggarwal.