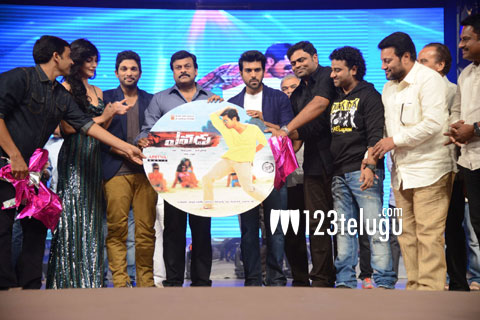 The audio launch of Ram Charan’s upcoming film Yevadu was launched on a grand scale a little while ago in Shilpa Kala Vedika, Hyderabad. Chiranjeevi was the chief guest at the event and several dignitaries from the film industry graced the event. Chiranjeevi, Ram Charan, Allu Arjun, Shruti Haasan, Vamshi Paidipally, Brahmanandam, Dil Raju, Allu Arvind, Sai Kumar, Devi Sri Prasad were some of the guests who were spotted at the event. Chiranjeevi launched the first audio CD and handed over the first copy to Allu Arjun and Ram Charan.

Talking about the film, Ram Charan said, “I heard the story two years ago and I couldn’t stop myself from hugging Vamsi Paidipally after listening to the script. It was unbelievable and I never thought that I would do such a film so early in my career. I believe that I might not do a film like Magadheera in a long time and I’m really lucky to have got a film like Yevadu. I sincerely thank the entire film unit who were quite supportive on the film’s sets. Vamshi Paidipally is a director with great passion and Dil Raju also takes a keen interest in the film. I’m confident about the film’s success.” Sharing his experience, Vamshi Paidipally recalled several incidents which had occurred over the past two years and said that he couldn’t have pulled off the film without his entire team. “I was adamant that I wanted Allu Arjun to play an important role in the film and I’m quite grateful to him for accepting the role. Although he’s on screen for only five minutes, people will keep him in mind throughout the film. I can guarantee that this film will make all mega fans quite proud,” he said.

The highlight of the event was a passionate speech by Chiranjeevi himself. He was quite overwhelmed with joy for being at a film related event after a long time and said, “Ever since I got into politics, I could sense that I was missing the joy of being amidst fans in events like these. I’m extremely happy that I am at a film related event. Recently, I read a book named ‘Secret’, where it was written that if you desperately want something to happen, it will. Perhaps, it was my fans and the entire team of Yevadu’s wish that I grace the event which made it all come true. Like Charan said, he’s quite lucky to have got a project like this so early in his career. I have already seen the film and I was quite thrilled with the output. Each and every actor has done a fabulous job and all the technicians have delivered their best. After Magadheera, I’m confident that Yevadu will be the film which will take Charan to greater heights.”

Later on, Ram Charan and Allu Arjun donated Rs 10 lakhs each for the PM Relief fund to help people who have lost their livelihood due to floods in Uttarakhand and several fans from various corners of AP and few other states also handed over cheques to Chiranjeevi.