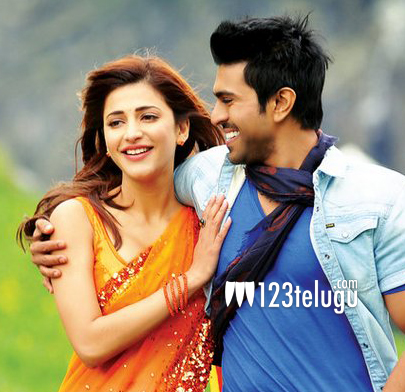 Ram Charan’s upcoming film Yevadu is one of the most eagerly awaited films of the year and already, there’s tremendous buzz about how the film has shaped up. When the film’s first teaser was unveiled earlier this year, Ram Charan’s look and the curiosity factor in the film grabbed a lot of eyeballs. Now, all eyes are on the film’s audio launch which will be held in Hyderabad on June 30. Apart from the songs, the film’s theatrical trailer is also going to be released and buzz is that it is going to be a visual treat for Ram Charan’s fans.

Director Harish Shankar, who got an advanced sneak peek, tweeted, “Just Seen ” Yevadu” Theatrical Trailer ..Every frame , Every Shot is Mind blowing. Advance Congrats to My producer Dil Raju Gaaru” and similar reaction was echoed by a close circle of people who have seen the trailer. The film has been directed by Vamshi Paidipally and Dil Raju is producing it. Currently, a song is being shot on Ram Charan and Shruti Haasan in Hyderabad. Amy Jackson is the other heroine. Devi Sri Prasad is scoring the music and the film is expected to release on July 26.