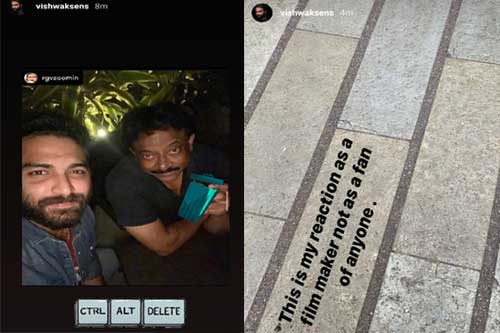 Director is surely earning a lot of haters by making pointless spoof movies on famous Tollywood stars. Even as his new film on Pawan Kalyan, Power Star, is gearing up for its release tomorrow, RGV is being targeted and disowned by young heroes and fans.

In a latest, young hero Vishwak Sen took to Instagram and cut all ties with RGV publicly. He posted a picture of him partying with RGV after HIT’s release and mentioned a sticker CTRL+ALT+DELETE. Vishwak also wrote, “This is my reaction as a filmmaker not as a fan of anyone.”

Well, it remains to be seen whether RGV will ever change his ways after hurting so many people’s emotions through his films and tweets.