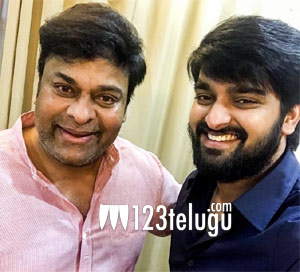 Young hero Naga Shaurya’s upcoming film, Chalo, is hitting the screens on February 2. Chalo is a romantic action entertainer set in a village named Tiruppuram on the Andhra-Tamil Nadu border. Kannada actress Rashmika Mandanna is making her Tollywood debut with the movie.

Meanwhile, Chalo’s pre-release event is scheduled to be held on January 25. The film’s makers have invited Megastar Chiranjeevi to be the chief guest at the event and Chiru readily gave his nod. Needless to say, Naga Shaurya is immensely thrilled with Chiru’s gesture and he took to Twitter to share his happiness.

Debutant Venky Kudumula is the director of Chalo, while Naga Shaurya’s parents Usha and Shankar Prasad produced the movie under Ira Creations banner. Sagar Mahati is the film’s music composer.

On the eve of Bhogi, happy to announce that Megastar Chiranjeevi garu accepted my request to attend our #Chalo pre-release function on January 25th. Naa aanandhaniki avadhulu levu. Thank you so much Sir. 😍😍 pic.twitter.com/NY9ul8oeJU