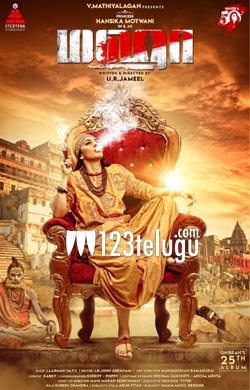 A couple of days ago, young heroine Hansika’s 50th film, Maha, kick-started its regular shoot in Chennai. The makers had unveiled a couple of special posters on this occasion. One of those posters has now landed in an unexpected controversy.

The controversial poster showcases Hansika wearing saffron and smoking, with several sadhus sitting at her feet in the backdrop of Varanasi. Angered by this outrageous depiction, a person had filed a case against Hansika and the film’s makers. The case will be presented for a hearing at the Ranipet court in Vellore this Friday.

Debutant UR Jameel is the director. Maha also stars popular hero Srikanth. The film will get a simultaneous release in Telugu.