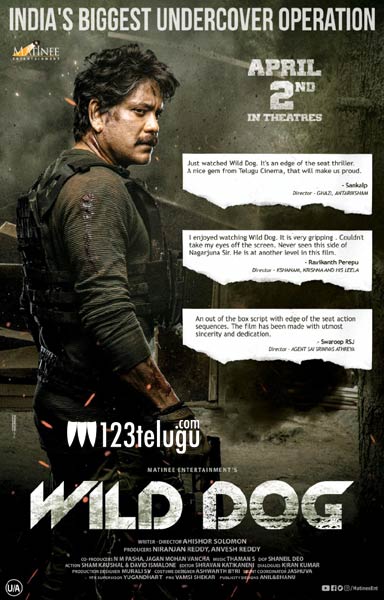 Nagarjuna’s much-awaited action thriller, Wild Dog, is gearing up for a grand release on April 2nd. Nag will be seen in the role of ACP Vijay Varma in the movie. As part of the promotions, the makers arranged a special preview of Wild Dog for a few Tollywood celebrities and received a unanimous thumbs up from.

Sankalp Reddy, director of Ghazi and Antariksham, said that Wild Dog is an edge of the seat thriller. “A nice gem front Telugu Cinema that will make us proud,” he added. Kshanam and Krishna and his Leela director Ravikanth Perepu said that Wild Dog is very gripping. “Couldn’t take my eyes off the screen. Never seen this side of Nagarjuna sir. He is at another level in this film,” he added.

Finally, Agent Sai Srinivas Athreya director Swaroop RSJ said that Wild Dog has an out of the box script with edge of the seat action sequences. “The film has been made with utmost sincerity and dedication,” he said. Directed by debutant Ahishor Solomon, Wild Dog also features Bollywood actresses Dia Mirza and Saiyami Kher in lead roles. Niranjan Reddy has bankrolled the film.