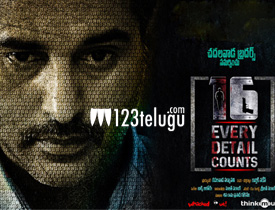 Off late, Indian filmmakers are trying out some very different films and one among them is the recently released hit Tamil film Dhuruvangal Pathinaaru. The suspense drama has been dubbed in Telugu as 16 and has hit the screens today. Let’s see how it is.

The film starts with a murder scene where a serial killer enters an apartment and kills a couple. The murder case is automatically handed over to a sincere inspector called Deepak(Rahman) who starts the investigation right away.

Things are not as simple as they look for Deepak because the case keeps getting way too confusing for him with every passing hour. Too many crimes are interlaced with each other making the plot and case even thrilling. Rest of the story is as to how Deepak solves the mysterious case.

Crime thrillers always click because of the taut screenplay and racy narration. The same happens with 16 too as the film is narrated with some brilliant screenplay. The way the murder mystery is solved and how the audience is confused till the end needs to be completely appreciated.

The taking, production values and the drama induced are top class as the film has many twists right until the end. Rahman is superb as the investigating cop and gives his career best performance. His performance during the climax is very good and the way he holds the entire film speaks volumes of his talent.

The second half is where the actual action starts as the film gets gripping completely. Also, the climax will surely impress you with the stunning revelations showcased.

One of the biggest drawbacks of the film is that it is too complex for a common man. The normal audience who loves basic stuff is bound to get confused with the way the case takes twists and turns.

As the film gets quite clear only during the last ten minutes, a section of the audience will surely have many doubts about the plot. All those who look for entertainment can keep away from this film which is completely drama based.

16 is technically a strong film and the entire credit should go to young director Karthick Naren who has written a fab story and executed it in an even better manner. The way certain crime scenes and links are combined only proves the genius of the director who is a talent to watch out for.

The background score of the film by Jakes Bejoy is top class and creates a tense mood during the entire duration of the film. Telugu dubbing is very good as Hema Chandra’s voice nicely suits Rahman. The editing is neat as the crisp runtime only helps the film. Camera work is top notch as the film mostly happens during the night mode and this has been showcased in a very effective manner.

On the whole, 16 is a gripping murder mystery filled with some good suspense right until the end. Rahman and director Karthick Naren do a terrific job and make the proceedings quite intriguing. If you ignore the slightly misleading proceedings during the first half, this film is a very engaging watch for all those who love suspense dramas.