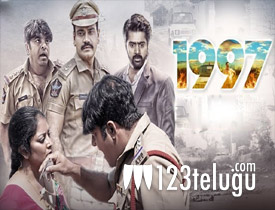 Continuing the trend of reviewing low-budget films, today’s pick is 1997 which has been released today. Let’s see how it is.

Vikram Rathod(Dr. Mohan) is a sincere police officer who is transferred to the Nizampeta village to control the atrocities that are happening there. Upon his arrival, he finds that a suppressed section is being punished and looked down on by the village Dora. The rest of the story is as to how Vikram Rathod takes things in control and brings peace to the village.

The backdrop of the film is pretty impressive and showcases the troubles faced by the people in the village well. A girl getting kidnapped and the emotional turmoil is also brought in well. Dr. Mohan, who plays the main lead did well in his role. He emotes a lot with his eyes which looks good.

Naveen Chandra, who plays a key role is impressive even with his limited screen presence. Srikanth Iyengar is amazing in his character and brings depth to the film. In a way, the supporting cast has also done quite well in the film.

The pace of the film is quite slow. As it is set in 1997, the mood is also dull and the director takes his own sweet time to get into the main story, and scenes that are unleashed during this time are boring. Though there was scope for gripping narration, the director missed it.

There are way too many confrontation scenes in the film which could have been avoided. The melodrama goes overboard in many areas. The emotions between the key characters should have been established in an even better manner. The second half becomes quite dull as the story moves slowly.

Music by Koti is good and so was his BGM as well. Production values in this period drama were also good. The camera work is neat but the editing is bad. Coming to the director Mohan, his story idea is good but he could not transform things in a better way on screen.

On the whole, 1997 has a good backdrop and a few neat emotions. But the slow pace, repeated scenes, and dull second half bring the film down in no time and make it a below-par watch this weekend.