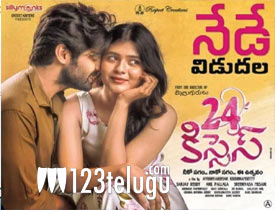 The makers of 24 Kisses have promoted the film on a very clever note and created a decent enough buzz for the film which has hit the screens today. Let’s see how this film turns out to be.

Anand(Adith Arun) is a film maker who is not interested in the institution of marriage. He has a lot of affairs and hits it off on the same level with Sri Lakshmi(Hebah Patel)as well. But to his bad luck, Sri Lakshmi falls in love with him and upon learning his ideology, she breaks up with Anand. Rest of the story is as to how Anand changes his thought process and wins his love back.

Adith Arun gets an author backed role and he does well in his character which is quite complex. His performance during the end of the film is good. Hebah Patel is neat in her role and does what is required of her in all the so called romantic scenes.

Naresh is pretty impressive as heroine’s father and as usual, brings a lot of depth to the proceedings with his screen presence. The last five minutes of the film have been handled well and also has a small message.The chemistry between the lead pair is decent enough.

The film is filled with minus points and it is very hard to put everything here. Firstly, a simple line in the story is added with concept of 24 Kisses which the heroine wants in the film. This idea itself is so silly as girls in today’s generation even have such weird thoughts.

There is no clarity in the proceedings as hero’s character changes track all the time. The romantic track lack conviction and all the lead pair do is to romance and fight with each other all the time.

Even the so called kissing scenes start getting vulgar after a point and there is no curiosity which is generated for the audience. Rao Ramesh, for the first time in his career, irritates the audience with his cheap performance.

The conflict point keeps changing so many times in the film and the idea of showcasing a guy who is not interested in marriage is old school and has not been conceived well at all. The proceedings are dead slow and have many yawning moments that make you feel sleepy.

The production values of the film are decent as the cameraman showcased the visuals on a good note. Music is below par but the background score was neat. Dialogues were average and so was the production design. Editing is a disaster as close to half an hour of the movie could have been easily chopped off.

Coming to the director Ayodhya Kumar, it is sad to see such a filmmaker attempt a film like this. He gets it completely wrong in every aspect and kills the film with his own hands. There is absolutely no sense in the proceedings as it is hard to understand as to what the director wanted to showcase through his narration.

On the whole, 24 Kisses is a bland and boring romantic drama which goes wrong in every aspect. Uneven screenplay, silly concept, and lack of interest in the proceedings kill the film completely. Credit should go to the makers for creating such a buzz regarding the 24 kisses which are otherwise not at all impressive on screen. Finally, the story starts off with the hero meeting a psychiatrist to help him with his breakup and all those who watch the film will have to do the same as the movie has that effect on you. Just stay away from this one.