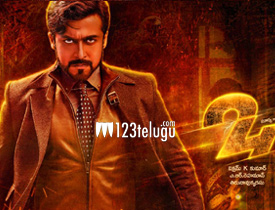 After all the wait and humongous promotions, Suriya’s 24 has finally hit the screens today. Let’s see whether it lives up to its expectations or not.

Shiva Kumara(Suriya) is a scientist who invents a time traveling watch. Seeing the varied profits that this watch can generate, Shiva’s brother, Athreya(Suriya) goes all out and kills Shiva Kumar and his wife(Nitha Menen).

But luckily, Shiva Kumar somehow safe guards the watch and his little son and hands him over to Saranya. 25 years pass by, and Athreya once again comes looking for the watch which is now with Mani(Suriya), son of Shiva Kumar.

During this process, Mani comes to know about the power of the watch and the evil intentions of Athreya. Rest of the story is as to how Mani manages to save the watch and faces the dreaded Athreya.

One can easily say that films like these do not come very often. You are bound to appreciate the thought process behind Vikram Kumar’s execution of the whole project. Getting an idea like this and narrating the film in such a comprehensive manner is no joke. Right from the beginning, he engrosses you with ample thrills and entertains you big time.

’24’ would not have been possible without Suriya. Easily, 24 is the best film in his career and the way he performs his triple role is just awesome. Suriya bowls you over with his screen presence and menacing negative role. The way he has showcased variations in all his characters is surely worthy of all awards.

The first half an hour is nail biting and just holds you on to the seats. The production values, camera work and VFX done elevates the film big time. Samantha is apt in her role and her chemistry with Suriya is decent. Also, the way climax is conceived and executed needs appreciation. The various thrills showcased featuring the watch and its time travel is way too good.

One of the biggest drawbacks is surprisingly, A R Rahman’s music. Sadly, none of the songs register one bit and they act as huge speed breakers in the narrative. Only saving grace was the thumping background score which is quite good. Also, there are certain logics which the common audience might find it a bit tough to understand and follow.

Even though the love track between Samantha and Suriya looks endearing during the first half, its gets on to your nerves during the second. The film needs serious trimming in these parts as one gets a feel that these scenes disturb the serious and interesting narrative of the proceedings.

Camera work and art direction needs special mention. The way the time travel, VFX work and all the sets have been designed is just marvellous and is one of the best in the recent times. Dialogues are good and the Telugu dubbing done looks perfect. 24 is rich in production values as every frame is dealt with carefully. Especially the graphics done on the watch look convincing and believable.

Coming to the director Vikram Kumar, with this film he will surely join the league of top directors in India. The way he has written the film, executed it and showcased Suriya in different roles in impressive. The interesting story line, sci-fi angle and the emotions, Vikram Kumar gets you hooked big time.

24 is surely one of the most technically brilliant films that has come out in the recent past. Suriya’s spell binding triple role, racy thrills and engaging concept will impress you big time. This film will take Suriya’s stardom to the top level and proves that whenever he does something different, it is bound to attract everyone. Finally, if you keep your expectations in check and bear the lack luster love track, 24 will entertain you completely.