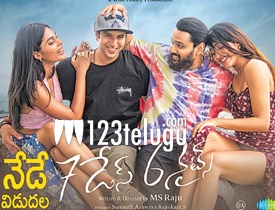 7 Days 6 Nights is a film that has been promoted a lot in the last few days. The film directed by MS Raju has hit the screens today and let’s see how it is.

Anand (Sumanth Ashwin) is a wanna-be director who is upset with his love failure. Both Anand and his friend Kumar (Rohan) head to Goa to relax there. Anand meets Ritiak (Meher Chawal) and falls in love with her. On the other hand, Kumar falls for Amiya (Krithika Shetty). The rest of the story is as to what happens to these couples in due course of time and how the trip ends on a positive note.

Sumanth Ashwin plays the main lead and he does an impressive job. He has improved vastly as an actor and is the major highlight of the film. Sumanth’s dialogue delivery and look are quite cool. Also, the other lead, Rohan is decent in his role throughout the film.

The Goa setup, vibe, romance, and issues faced by the two friends have been established quite well in the film. Meher Chawal looks beautiful and also performed well in the film. The comedy scenes between the two heroes work well in a few scenes. Sumanth Ashwin’s comedy timing is also good. Krithika Shetty and Gokaraju Ramana are also neat in their roles.

The pacing of the film is quite slow and director MS Raju takes a lot of time to enter into the main plot as he introduces the main characters in detail which was not that needed.

Though there is a passable comedy, more elevation should have been given to this aspect as the script had scope for it. The story of the film is quite routine and barring a few emotional scenes, there is not much drama in the film.

The music is just about okay but the BGM is quite good. The camera work needs a special mention as the Goan visuals look trendy and MS Raju’s production values are also top-notch. The editing is also decent. Coming to the director MS Raju, he has done a passable job with the film. Though he elevated the comedy and emotions well in a few areas, his drama needed more grip in the proceedings.

On the whole, 7 Days 6 Nights is a youthful drama that has passable comedy and emotions. But the story, narration, and proceedings are ordinary and do not give that kick that is expected from such comedy capers, and end the film as a below-average watch this weekend.