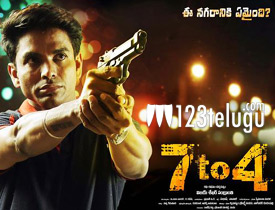 7 to 4 showcases a team comprising of four youngsters and their variety punishments to those who resort to sexual assaults on women in Hyderabad during the nights.

These four protagonists target suspects of sexual crimes and also those who are in police’s watch list. The story is about the team’s pursuit to nab these criminals and punish them between 7 in the evening to 4 in the morning.

Why do these four friends form as a team ? What is their connect with the police department ? and How do they manage all this ? That forms the rest of the story.

The major plus point of the film is the idea that the makers tried to convey through an interesting story. They should be appreciated for coming up with a film that tackles sexual abuse on women in a very innovative way.

The variety punishments the team subjects the culprits to will entertain commercial movies lovers. The film’s 100 minute crisp duration is yet another plus. Even though the entire cast is relatively new, they have performed supremely well.

The major minus point of the film is the lack of a strong emotion in the story. The entire film looks like a bland police operation that is a mix of certain suspense elements and a few crime scenes.

Certain scenes appear repetitive. The characterizations of the lead cast looks pretty weak. The lack luster screenplay bores the audiences until the pre-climax. The film ends abruptly and violence has gone overboard in certain scenes.

Music and cinematography departments score the brownie points. All the songs are situational and are decent to listen to. The title track sung by Usha Uthup sets the mood right. Certain innovative camera angles showcase Prabhath’s eye for novelty. Editing is adequate.

Director-producer Vijay Sekhar Sankranthi’s thought behind making a film that centres around a social issue is appreciable. However, the director falters in narrating the story in an engaging manner with his emotionless proceedings. Production value are decent.

7 to 4 follows the traditional format of narrating a thriller where several small and intriguing sub plots are woven into the main theme. An impressive lead cast and interesting story line are major highlights of this film. However, lack of strong emotional connect and over the top violent scenes let down the film completely.