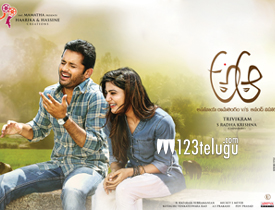 Trivikram’s films are awaited with beated breadth and the latest one that the talented director unleashes this week is A..Aa. Starring Nithin and Samantha as the main leads, this film has hit the screens today. Let’s see how it is.

Anasuya(Samantha) is the only daughter of Naresh and Nadhiya. Her life is dominated by her mother who in turns fixes her marriage with a rich guy. As expected, Anasuya doesn’t like this and on the suggestion of her father leaves to her aunts house to spend some free time.

This is the time where she meets Anand(Nithin) and falls in love with him. Twist in the tale arises when Anand is forced to get married to Naga Valli(Anupama Parameswaran) because of his personal problems.

Rest of the story is as to how Anasuya deals with her angry mother and sidelines Nagavalli to win her love for Anand.

One of the biggest advantages of A..Aa is the clean nature of the film. Trivirkam once again manages to weave his magic and executes a beautiful family drama. There are so many feel good moments which will keep you engrossed with the proceedings. A..Aa is Nithin’s career best performance and he impresses big time. He plays a subtle character and not once does he goes overboard in his role. His performance in the climax and his chemistry with Samantha is just so endearing.

Samantha dominates the proceedings big time. She is the heart and soul of the film as the story moves from her angle. Right from her simple expressions to her helpless nature in front of her mother, she plays the role with aplomb. Samantha lights up the screen as Anasuya and you can see a new angle in her performance.

First half of the film is very entertaining and has some beautiful songs. Anupama Parameswaran makes a decent debut and her jealousy angle with Samantha is showcased supremely well. One cannot ignore Rao Ramesh’s performance in the film. Probably, he is the best actor around doing supporting roles and his performance during the climax is hilarious.

Trivikram gives a mature role to Naresh who is also turning out to be a super character artist. His chemistry with Samantha and the way he holds the film in many areas is very good. Music is yet another asset of the film as all the songs have been shot extremely well.

Second half of the film wanders a bit here and there. The mood of the film gets lost after a point and the proceedings get a bit slow. Story of the film is quite normal and does not have anything much interesting.

Length of the film is a bit high and there are scenes which can be trimmed to make the impact even better. Pace of the film is a tad slow and certain scenes featuring the marriage proposal and Samantha wooing Jabardasth Chandra should have been edited out.

A..Aa has some breath taking visuals. The camera work is top notch and is one of the highlights of the film. The way a simple love story is showcased with these visuals makes this film look even more rich. Production values are top notch and Trivikram makes use of the village locations to the fullest.

Screenplay is apt and does not deviate much. As expected, dialogues are quite meaningful and create the right impact. Coming to the director Trivikram, A..Aa is completely his magic on celluloid. The way he narrates a simple love story with a gripping narration and enough fun is what makes things work here.

As expected, Trivikram once again proves that he is magician of his craft with A..A. The way he has narrated this breezy family drama with some lovable and entertaining elements are major assets. This is a film which will do exceptionally well with the family and overseas audience as the lead pair ensure that things fall in right place. If you ignore the predictable story line, you can take your entire family and watch the magic of Trivikram Srinivas in this feel good family entertainer. Recommended.