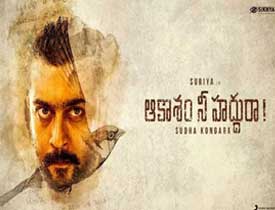 Aakasam Ne Haddu Raa is one of the most awaited films in recent times. Starring Suriya in a lead role, this film is out on Amazon Prime. Let’s see whether it lives up to the hype or not.

Chanda Mahesh(Suriya) is a well-educated youth who always dreams of starting an airline. For this, he studies the pilot course and also becomes one. As time passes by, he along with his friends, leave their jobs and pursue the dream of launching India’s first low-cost airline Deccan Air. But Mahesh has to take on some of the biggest names in the aviation industry like Paresh Goswami(Paresh Rawal). The rest of the story is as to how Chandra Mahesh fulfills his dream of launching Deccan Air and what problems does he face in his journey.

Suriya gives one of his career-best performances with this film. The intensity which we have been missing in Suriya’s recent performances is brought back superbly by the star actor. From scene one, Suriya is magnificent as the restless soul who wants to fulfill his dreams. Be it in the interval scene where his dream is shattered or the climax episode, where he goes through a roller coaster of emotions, Suriya steals the show and will arrest you with his performance.

One of the biggest pillars of the film is the heroine Aparna Balamurali. She gives solid support to Suriya and plays the doting wife’s role supremely well. The way she looks, expresses her emotions, and showcases solid chemistry with Suriya is the major asset of the film. Mohan Babu does not have much screen time but in the three scenes he gets, the legendary actor impresses and brings depth to the film.

One can not forget the emotional aspect of the film. Sudha Kongara’s writing is so strong that every emotion works in the film. The husband-wife angle, mother-son relationship, and conflict between Suriya and Paresh Rawal, all these episodes have gripping emotions.

Paresh Rawal is classy in his role and brings a lot of depth to the film. The production design is solid and visuals of the bygone era have been showcased in a superb manner. The film is filled with several goosebump oriented scenes and will impress you with its engaging narration.

The film runs on a very serious note and that is the reason some of the regular audiences who expect something from Suriya will be disappointed. Also, the pace of the film is a bit slow as the story unfolds leisurely and in detail. The first ten minutes post interval becomes dull with too much melodrama and repetitive struggles of Suriya being showcased.

A little bit of care should have been taken to show the financial aspects of how Suriya gets money to start his airline. He struggles for even 15000 at a point in the film but aims of starting an airline, this line is stretched and looks a bit artificial.

This film is super strong in terms of its technical Aspects. Music and BGM are a major plus as GV Prakash fills life into the proceedings. The camerawork is astonishing as the village set up and aviation backdrop are showcased nicely. The VFX used for the film is also top-notch. Satyadev dubs for Suriya and it takes at least ten minutes for you to adjust to his voice. But once that is done, Satyadev does so well. The lyrics, Telugu dubbing, and costume design, everything falls in place perfectly.

Coming to the director Sudha Kongara, she has proved her worth once again. The manner in which she mixes facts with nice fictional elements was so good to see. Sudha stays true to the emotions and showcases gritty drama which is the biggest highlight of the film. She makes us root for Suriya’s character right through the film and this is where you get connected to the emotions of a man who dreams big and shows how things are achieved.

On the whole, Aakasam Ne Haadu Ra is one of Suriya’s best performances to date as he lives in his role and takes us on a roller coaster of emotions. The setup, amazing performances, superb production values, and engaging drama light up the screen from scene one. Barring a slightly slower pace, this is one of the very well made films in recent times and makes up for an inspiring watch. Don’t miss it.