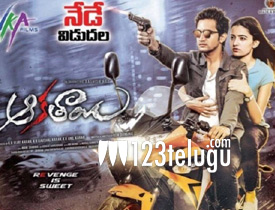 Vikranth (Ashish Raj) is a happy go lucky yet intelligent engineering student who falls in love with a girl named Anagha (Rukshar Mir). Vikranth’s life turns upside down when he comes to know about a shocking news about his parents through Anagha.

While Vikranth is in the pursuit to find out the truth about his parents, the world’s most wanted criminal Jehangir (Pradeep Rawat) enters his life and wrecks it totally. What was the shocking secret about Vikranth’s parents? Why did Jehangir enter his life? How does Vikranth solve these mysteries? That forms the rest of the story.

The way the director kick-starts the film’s first half is interesting. Hero’s character establishment scenes have decent comedy. Heroine Rukshar Mir adds some glamor to the proceedings. A couple of romantic scenes featuring the hero-heroine introduction and hero proposing to the heroine were quite impressive.

The interval sequence which leads to a lot of unexpected twists in hero’s life, the revelation of a lot of characters’ true behaviors and the hero’s pursuit to know the truth set a solid lead for the second half.

There are several demerits in this movie. Just when the proceedings get interesting with a decent first half, the director’s haywire narration with unnecessary scenes jeopardizes the viewing experience. After a good interval sequence, the film falls flat in the second half.

Ruksar Mir does not have much to do in the second half of the film. The chemistry between the lead pair is hugely disappointing. Songs come as road blocks in the film and the climax is also not up to the mark.

The basic revenge drama is the same like in many old films and has nothing novel to offer. Just to create some twists so many unnecessary characters have been introduced which side track the film completely.

Camerawork by Venkat and editing by M R Varma is pretty decent. Mani Sharma’s background score is quite efficient and elevates the film to a decent level. It is because of his score that even normal thrills look watchable. Production values are very good. Coming to the director Rom Bhimana, he has narrated the film half-heartedly. The way he has induced the interval block is very good but he is not up to the mark during rest of the times.

On the whole, Akatayi has an interesting premise and good interval block. But post the half time, the film sidetracks as too many sub- plots and routine narration derail the film completely making it yet another routine fare this weekend.