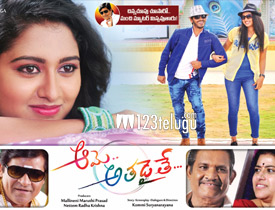 Continuing the trend of low-budget films, yet another movie which has hit the screens today is Ame Athadaite. Let’s see how it is.

Sudhakar(Hanish) is a poor man who comes to the city for a better life. While he struggles hard to cope up with the pressures of the city, he gets a rude shock as his dad passes away back in the village.

Left all alone in the city, Sudhakar requests everyone for money but gets rejected every time. This is the time when he makes a superb plan and wears a disguise as a woman. Why did Sudhakar become a woman ? Why did he change his identity ? To know all the answers you need to watch the film on big screen.

Sentiment scenes in the film are quite interesting. Tannikella Bharani proves what a wonderful actor he is. The legendary actor does a wonderful job in his role. The way he showcases superb emotions as a helpless dad is very good.

All the emotional scenes featuring Bharani and his son are executed well. The basic plot of a man changing into a woman to make it big is a bit interesting. Ali’s comedy evokes decent comedy in certain areas.

Even though the basic idea of the plot is good, the execution is hugely disappointing. When you choose such interesting points like a man changing as a woman, one needs to add either good fun or a gripping screenplay. But sadly, the makers fail to use this and make the film go haywire.

The scenes showcasing the hero in a lady get up and he trying to woo his friends for comedy looks cheap and irritating. One song which comes during the pre-climax leaves you with a headache. Except for Ali, the film has basically no entertainment and looks bland till the end.

Production values are decent for a low budget film. Editing is below average and so were the dialogues. Music by Krishna is pathetic but his background score is okay. Camera work is just about fine. Coming to the director Satyanarayana, he has done a very bad job with the film. Right from his casting to his narration, everything goes for a toss in the film. Except for showcasing the father-son relationship, none of his directorial skills is worth mention.

Having a good concept on paper does not ensure you the success. It is the way interesting plots like the story of Ame Athadaite are conceived on screen. But sadly, the wayward narration and lack of basic seriousness in the proceedings spoil the outcome of this film completely and makes it a tedious watch this weekend.