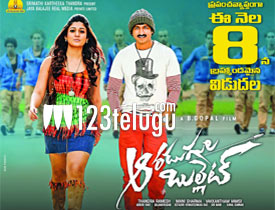 Aaradugula Bullet is a film that has been stuck with its release for over four years now. The action drama has finally managed to release today and let’s see how it is.

Siva (Gopichand) is a careless youth who loves his family to death. But his father (Prakash Raj) hates the fact that Siva is aimless in life. Siva falls in love with Nayana (Nayanthara) and just when things seem to be going fine, a dreaded don (Abhimanyu Singh) grabs the land of Siva’s father. The rest of the story is about how Siva fights against all odds and saves his property and wins his dad’s heart as well.

Gopichand suits the role perfectly and looks young. He does well in all the fights and has been showcased well by director B Gopal. Nayan looks gorgeous and shares good chemistry with Gopichand.

Prakash Raj plays a key role and gives an emotional performance. The track of misunderstanding between the father and son has been handled well. Also, the chemistry between Gopichand and Nayanthara looks good.

The first half is packed well with passable romance, drama, and family emotions. The film also has late actors, MS Narayana and Jayaprakash Reddy who evoke decent comedy along with Brahmanandam.

The villain is the weakest link of the film and does not create that kind of an impact. Yet another major issue of the film is that everything is showcased in the first half itself and there is nothing left for the latter part.

Also, as the film has been stuck with the release for a long time, the backdrop, story, and emotions look outdated. The father-son hate story has been narrated in so many films earlier.

Production values of the film are decent and so was the camerawork. Kanal Kannan’s action part is quite impressive as fights have been composed well. The music by Mani Sharma is decent and all the songs look cool on screen. Coming to the director B Gopal, he has done just an okay job with the film. His narration lacks focus in the second half and bores the audience with routine narration.

On the whole, Aaradugula Bullet is a routine action drama that clicks well in the first half. The second half goes for a toss with forced emotions. The film has decent action scenes but that does not help the film in the latter part making it a dull watch this weekend.