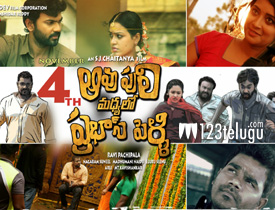 Continuing the trend of low-budget films, yet another project which has hit the screens today is Aavu Puli Madhyalo Prabhas Pelli. Let’s see how the film fares.

Nagaram Nani(Prabhakar) is a dreaded goon who is a part of land mafia in Nellore. His only problem is that he hates women to no extent which includes his own sisters too. This is also the same time when his sister Amruta(Ashwini) falls in love with a guy named Prabhas.

Right, when the time Amruta decides to reveal her love to Nani, yet another man named Prabhas(Ravi Teja) enters the scene. Who is this Prabhas ? What is all this confusion ? How will Amruta convince her brother ? To know answers to these questions, you need to watch the film on the big screen.

One of the biggest assets of the film is the idea of inducing comedy in a serious topic. A man who hates women, the way he deals with his gang members who all have girlfriends, all these things have been written well.

Kalakeya Prabhakar does a decent job in his role. In emotional scenes too, he manages to impress. The interval twist is decent and the comedy that is generated through Prabhakar’s friends is executed nicely.

A simple point has been stretched way too far in this film. Even though some scenes evoke good comedy, the film falls in no man’s land. Sometimes the film gets completely serious and the other time it is funny. The director failed to strike a perfect balance between these both.

The film is dragged to no extent just to showcase simple twists. Young hero Ravi Teja hams big time and goes over the top in his role. Venu’s comedy track also irritates the audience completely. Heroine Ashwini needs acting classes as she has done a very bad job in the film. The climax of the film looks hurried up.

Music is quite disappointing but the background score is good. Editing is just about okay. The camera work is okay and suits the mood of the film well. Coming to the director Chaitanya, he fails completely in his attempt to make a dark comedy. His narration lacks the spark and makes the film go haywire.

Generating dark comedy is no joke as one needs to have a strong screenplay and taut narration to evoke comedy out of serious situations. Sadly, the makers of Aavu Puli Madhyalo Prabhas Pelli falter in this area completely and narrate the film in a disappointing tone. Other than Prabhakar’s sincere efforts, this film has nothing much to offer.