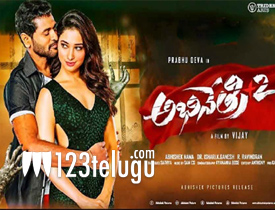 Abhinetri 2 is a film which was being awaited eagerly. The film has hit the screens today and let’s see how the film is.

Krishna(Prabhu Deva) and Devi(Tamannah) lead a happy life together. As time passes by, Krishna is possessed by two evil spirits named Ranga Reddy and Alex. With this weird avatar, he starts following two girls and forces them to marry him. Upset with this, Devi gets into a contract with both the evil spirits. What is that contract? How did Devi save her husband from the evil spirits? To know the answers, you need to watch the film on the big screen.

Tamannah is the main key to the film. She showcases two variations and is superb. Tamannah’s glamour is a major attraction and in one of the songs, the star heroine dances extremely well and provides superb eye candy.

The surprise package of the film was Nanditha Swetha. She looked glamorous in her role and gave a good performance. The concept of the film is also decent. Rest of the cast did their roles well.

Even though director Vijay’s concept is good, his narration was below par. Just for the sake of fun, he added several comedy scenes and sidetracked the film most of the time. He also let go off the main theme and concentrated on unnecessary elements which created no effect.

Prabhu Deva is possessed by two spirits and this is a unique twist and could have been showcased well but director Vijay did not use these situations and disappointed with his zeal to make the film look more commercial.

There are many logics which go missing in the film. Hero Prabhu Deva sees his crazy avatar through the video footage but stays quite till the end of the film as if he didn’t knew anything. This part looks logicless and silly.

Music was just about okay but the BGM was very good. Editing is perfect in the first half but disappointed in the second. The camerawork is top notch as the effects in the horror scenes have been showcased quite well. Production values of the film were also okay. Coming to the director Vijay, he lost out on good content and made the proceedings boring with his wayward direction.

On the whole, Abhinetri 2 is a silly horror comedy which lacks basic flow. In spite of having good content, the makers add boring and unwanted scenes which hamper the proceedings completely. Except for Prabhu Deva’s performance and Tamannah’s glamour, this film has absolutely nothing new to offer. Watch it when it comes on TV and look for something better this weekend.