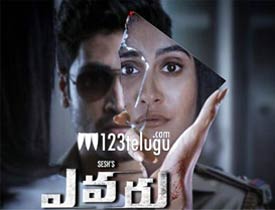 Evaru is a film which has created a superb buzz in the last few days. Thanks to its gripping trailer, the film has caught the imagination of many. It has hit the screens worldwide today and let’s see how it is.

The film starts off by showcasing Sameera(Regina) as a suspect who gets charged in the murder of a cop Ashok(Naveen Chandra). Sameera’s husband does not help her much and seeing this situation, she decides to deal with the case herself. So, she pays big bucks and hires Vikram(Adivi Sesh), a corrupt cop to help her. How does Sameera come out of her mess? What role does Vikram play in all this? and Why did Sameera kill Ashok? To know the answers, you need to watch the film on the big screen.

The first thing that hits you the most is the engaging twists that keep coming at you time and again. They have been planned and executed in a way that they make the film suspense-filled most of the time.

Adivi Sesh has the knack of picking good thrillers and does the same with Eavru too. His performance as the corrupt cop is superb. Most of all, Sesh is superb in all the confrontation scenes with Regina which are quite gripping.

Regina makes a solid comeback with Evaru. She is amazing in her double-edged role and gives her carer best performance. She as Sameera is helpless, cunning and arrogant at the same time and showcases these emotions in a superb way. Regina’s performance in the second half is the highlight of the film. The climax is amazingly planned.

The silent killer in the film is Naveen Chandra. He proved what a talent he is with his negative act in Aravinda Sametha. In Evaru too, he gets a major role and gives his best. All his scenes with Regina are quite gripping. Murali Sharma is neat in his role and so was the young actor who did the role of a cancer patient.

All those who have seen the original The Invisible Guest and its remake Badla, will not be thrilled much as the makers have changed many things which they might not like it.

Production values of the film by PVP are top-notch as the proceedings look quite posh. This is even more highlighted by the amazing camerawork which elevates the amazing lighting done to the set work. The music score by Sricharan Paakala is thumping and elevates the film to another level. Regina has been styled well. Dialogues are top-notch and suit nicely in the narrative. Editing is top-notch as the film has been kept crisp.

Coming to the debut director Venkat Ramji, he makes an impressive debut. The manner in which he has owned the remake and made subtle changes to the original makes all the difference. Though he starts the film on a slow note, he makes it up in the second half and brings in the twists with aplomb keeping the viewers engaged.

On the whole, Adivi Sesh impresses yet again with his latest outing Evaru. The film is a gripping murder mystery which has plenty of twits executed in a decent manner. Those who have seen the original will find the film just about okay but for those who haven’t, the taut performances, gripping screenplay, and superb climax will surely impress them. Go for it.