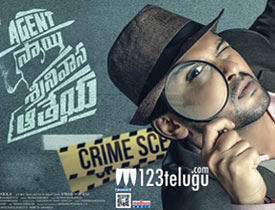 Agent Sai Srinivasa Athreya is a film which is making a lot of noise all over. Starring Naveen Polishetty, this film has released today. Let’s see how it is.

Athreya(Naveen Polishetty)is a small time detective agent in Nellore who is looking for one big case to make it big in his career. One fine day, he comes across the case of a dead body which has been abandoned near a railway track. Athreya starts his investigation and comes to know that these bodies which are being found have a criminal connection. Rest of the story is as to how Athreya goes in detail and cracks this case.

One of the biggest strengths is the subject that has been used for this thriller. The missing cases of dead bodies and how a small time detective gets into it has been thought of well and looks quite novel.

Naveen Polishetty makes a solid debut as a solo hero and has potential. His role demanded a lot of variations and fun which had to be done with a straight face and Naveen was pretty good in his role. He cracks the audience up with good comedy and is also very impressive in the serious scenes.

Heroine Shruthi Sharma also played her role well and gave good support to the hero. The supporting cast is new but they were on the spot. The manner in which all the twists are revealed is good. The suspense factor has nicely been built up till the last ten minutes.

The investigation scenes and how the film is brought to the interval point looks good. Also, the hero’s character is given a comedy angle and that created some decent fun in the film. The locations and production values of the film need a special mention as the film looks appealing throughout.

The director drags the film a bit in the last 15 minutes. The suspense is broken by then and just to nab the criminals, the director added many scenes which make the film slow.

The film needs some editing as many scenes look long. If it is trimmed by ten minutes things will be very impressive for the audience.

Also, things look a bit over the top in certain scenes when a small time agent like Athreya easily takes the help of a cop and does his investigation in his own and easy manner.

As told earlier, the film is technically sound. The camera work is top notch as the visuals look arresting. The dialogues are good and so was the sound design and background score. The film’s lighting is also apt and brings a lot of seriousness to the proceedings.

Coming to the director Swaroop RSJ, he has done a impressive job with the film. It’s very hard to narrate a thriller with good twists and Swaroop has done well with his taut narration. Special mention should go to his detailing which is top class. Every aspect in the case is showcased well and creates a good suspense factor. He is surely a talent to watch out for and if he would have made the last fifteen minutes crisp, things would have been even better. Nevertheless, his way of handling the thriller is quite good.

On the whole, Agent Sai Srinivasa Athreya is an impressive thriller which has good suspense and taut narration. Naveen Polishetty makes an impact with his lovable performance. Realistic approach and interesting screenplay keeps the viewers engaged. Apart from the slightly dragged last ten minutes, this film has several aspects to make it a gripping watch this weekend. Recommended.