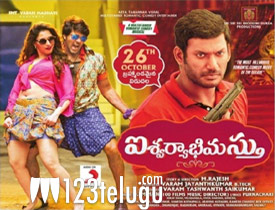 Arya-Tamannah’s 2015 Tamil film, Vasuvum Saravananum Onna Padichavanga has been dubbed in Telugu as Aishwaryabhimasthu. Touted as a romantic comedy, this film has hit the screens today. Let’s check how it is.

Aishwaryabhimasthu is the tale of two friends Abhimanyu and Aasu portrayed by Arya and Santhanam respectively. They share a very thick bond which is not liked by Abhimanyu’s girlfriend (Tamannaan) and Aasu’s better half Seema(Bhanu). The girls try hard to break their friendship but things do not happen. Rest of the film is about how Abhimanyu and Aasu continue to remain friends without upsetting their lovers.

Arya-Santhanam’s chemistry can be termed as one of the positive points of the film. They acted quite naturally and brought depth to the proceedings. Arya is perfect in his role of an easy go lucky guy and so was the case with Santhanam who evoked good laughs with his comic timing and fun-filled dialogues.

As usual, heroine Tamannaah looks gorgeous and provides the required glamour show. Young girl Bhanu, who is paired opposite Santhanam is good in her role as a nagging homemaker.

Comedian Vidyullekha Raman evokes decent laughs at regular intervals with her funny expressions. One particular first-night scene of her’s with Arya during the second half is hilarious. Hero Vishal’s special appearance during the climax and his universal message to married men is good.

Director M. Rajesh, who generally picks lighter themes has come up with yet another flick which has a thin storyline. His earlier films like Nene Ambani worked only because of passable entertainment which is sadly missing in this film.

Most importantly, the film lacks a proper flow in narration as it has many dragged episodes in both the halves. After watching Nene Ambani, the audience expect a double dose of fun but sadly, the director narrated the proceedings with many silly scenes instead of a healthy comedy.

Visually, the climax song is canned lavishly. Director M.Rajesh took things for granted and presented the film with too many lags in it. If he would have inserted enough comedy elements the result would have been definitely better. Editing by Vivek Harshan is not up to mark as too many dragged scenes can be chopped off easily. Cinematography by Nirav Shah is decent. Music by D. Imman is a big letdown as the album has no freshness in it. Production values for this limited budget film are good.

On the whole, Aishwaryabhimasthu is a routine romantic comedy which has limited fun but lacks good romance. A few scenes between Arya and Santhanam are pretty good but the dragged scenes and flat narration disturbs the flow and will not go well with the general audience. All we suggest is to skip the film this week and watch it when it is aired on TV.