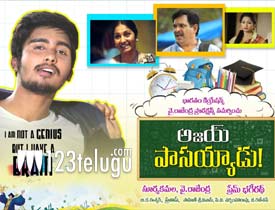 Continuing the trend of low budget films, yet another movie which has hit the screens today is Ajay Passayyadu. Let’s now see how the film turns out to be.

Ajay(Ajay Aman) is a graduate who falls in love with Nandini(Ambika). Seeing his helping nature, even Nandi falls for him. When everything seems to be going fine, Ajay gets into a weird situation by helping his friend and this creates a bad impression in the eyes of Nandini who breaks up with him. What is that situation? How did Ajay come out of it? and how did he make peace with Nandini is the whole story of the film?

Ajay Aman did a decent job in his debut film. He was quite energetic in his approach and carried the film on his shoulders most of the time. Heroine Ambika is good in her emotional role. Glamor wise, she is just okay but her performance in crunch scenes was quite impressive.

Jhansi was decent in her role and brought a few scenes to life. Actor Siva Narayana who did the father’s role did his supporting character quite well. There a few comedy scenes which were handled well by the director in the first half.

The manner in which the lead pair fall in love has been showcased in a very silly manner which looks over the top. None of the characters have weight in their roles as they have been written without any depth.

The proceedings in both the halves are so dull that you get bored to no extent. There is not much entertainment as the proceedings take their own time to come to the actual story.

As most of the supporting cast is new, they did a poor job and do not add any weight to the film. The narration lacks punch in several areas and this creates a boring effect on the proceedings.

Music by Sahini Srinivas was disappointing as none of the songs were good. Camera work by Ganesan was below par as the film looks quite dull in many areas. The production values of the film are ordinary as the locations do not impress you. Editing is ordinary and so was the production design.

Coming to the director Prem Bageeradh, he failed in his execution of the love story. Not only his script was old, but his ordinary execution and lack of basic drama made the film go haywire in no time.

On the whole, Ajay Passayyadu is a disappointing romantic entertainer which has nothing going its way. Lack of depth in the proceedings, bad supporting cast and shortage of basic emotions kill the interest of the audience right away. It is better that you skip the film this weekend and re-visit an old romantic love story to make your mood better.