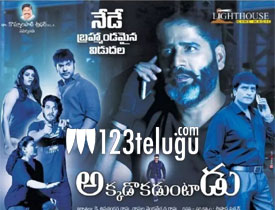 Along with a few other small films, a movie called Akkadokaduntadu has also hit the screens today. Let’s check how it is.

In order to get out of a hit and run case, five friends (Karthik, Vamsi, Nithya, Aadhi and Satya)decide to bribe an eye witness by looting black money of a reputed politician KK (Ravi Babu). Soon after reaching his place, the friends face a problem in the form of a visually challenged person called Yogi(Siva Kantamneni). Who is this Yogi? Why is he protecting KK’s black money? Is there any backstory behind his eyesight? How will the friends escape out of the case? To know this, you have to watch the film in the theaters near you.

Siva Kantamneni, who acted a visually challenged person is good in his role and his flashback episodes with family are narrated on a decent note. All the artists in the friend’s gang are believable in their roles and gave an okay performance.

Ravi Babu as a corrupt politician is neat and does his role with a lot of sincerity and brings a lot of depth to the film. A social message highlighted during the climax is good.

The major drawback of the film is its unengaging narration. Till interval point, the audience doesn’t know about what the film is all about. Scenes are lackluster and have a lag in the narration.

In the latter half, though we get clarity on the film’s actual theme, the flat and slow-paced narration makes the proceedings boring.
There a few cinematic liberties taken in establishing Yogi’s visually challenged character which looks over the top and artificial on the screen.

Director Sri Paada Viswak’s idea of making a dark thriller is nice but his narration lacks focus. If he would have come up with a better screenplay, things would have worked in favor of the film. Editing work is decent as the film’s runtime is short and crispy. The cinematography is good as a few natural locations in the forest area are captured well. Music is adequate but the background score for Yogi’s elevation scenes is good. Production values for this low-budget film are Okay.

On the whole, Akkadokaduntadu is the same old dark thriller which lacks a proper narration. Slow-paced and flat proceedings in both the halves make this film a boring watch for this weekend.