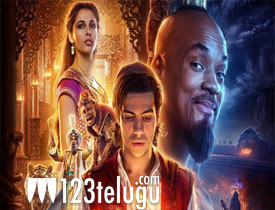 Aladdin is one of the most awaited films in recent times and it has created a big craze in Telugu states as the F2 combo, Venkatesh and Varun Tej have dubbed for main characters in the film. We have been to the Telugu version and bring you the review in detail.

As we all know the film is a live adaptation of Disney’s animated classic Aladdin from 1992. The film is based in the kingdom of Agrabah where a small thief Aladdin(Aladdin (Mena Massoud) falls in love with its princes’ Jasmine(Naomi Scott). He tries hard to woo her but the evil chief advisor to the Sultan of Agrabah puts forward a condition to Aladdin that he brings the magical lamp along with its Genie(Will Smith) which grants the three magical wishes. Rest of the story is as to how Aladdin brings Genie to life and takes his help in winning the love of Jasmine.

One of the biggest plus points is undoubtedly Will Smith’s performance. He as the Genie is magical, funny and full of life. Will Smith’s body language as the Genie is top notch and the spectacular special effects done on him makes his role look even more interesting. His chemistry with Aladdin played by Mena Massoud is superb in the film.

Speaking of Mena Massoud, the young actor has given his best as Aladdin. Initially, he looks a bit lost in the film but as the story moves ahead, he is great to watch on screen. Naomi Scott is a dream and looks gorgeous. She is top notch as the Arabian princess and gives a sensible performance.

The love story between Aladdin and Jasmine has been showcased on a sensible note. The visual effects need a special mention as the Arabian world has been created on a spectacular note. All the scenes which showcase the magical carpet flying with Aladdin and Genie’s special powers have been created amazingly.

The biggest drawback in the film are the songs. Strangely, too many musical bits have been included in the film which irritates after a point. As the songs are dubbed in Telugu, the pain is even more.

Both the first and second half start on a slow note. The climax is satisfactory but some more action or visual effect scenes would have made a lot of difference. The villain played by Marwan Kenzari is not that great and a more powerful villain could have made things more interesting.

The background score is pretty good and has a lot of Indian touch. So, most of the time you feel as if you are watching an Indian film with good production values. Dubbing done for the Telugu version is perfect. Venkatesh and Varun Tej’s voices enhance the viewing experience in a big way. VFX is superb and makes the film look amazing in several scenes. All the special powers and how they are executed through Will Smith have been showcased in a superb manner.

Coming to the director Guy Ritchie, he has adapted the animated classic on a decent note but adds a lot of drama which was not necessary for many areas. There are a lot of wow moments which will be loved by the kids and the director has succeeded in this department. But if he would have avoided the song bits and added more action in the climax, the output would have been even more stunning.

One the whole, Aladdin is an extravagant fantasy drama which has some spectacular visual effects and thrills. But the presence of excess songs and a bit dragged second half are some de-merits. If you ignore all this and want to see how the famous fantasy story of your childhood is given life  with today’s technology, you need to watch the film on the big screen to enjoy the ride. As the film is dubbed on a good note in Telugu, the kids and general audience will like the film even more.