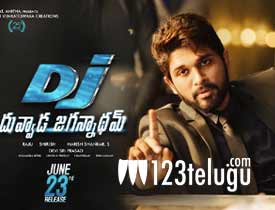 The wait is finally over as the much-awaited action entertainer, DJ has finally hit the screens on a massive scale. Let’s see whether it gives Allu Arjun yet another hit in his career.

Dhuvvada Jaganadham(Allu Arjun) is a small time brahmin boy who goes against all odds and helps others. Seeing this quality of his, a high-profile cop(Murali Sharma) asks him to become DJ, a man who fights crime in disguise.

This is the same time when Dhuvaada falls in love with Pooja(Pooja Hegde) the daughter of a high profile minister(Posani) involved with yet another crime lord Royyala Naidu(Rao Ramesh) who also operates in disguise.

On the other hand, DJ decides to take on Royyala Naidu in his mission but does not know who he is in actual life. Rest of the story is as to how Duvvada Jagannadham alias DJ manages to finish Royyala Naidu.

One of the biggest assets of this film is undoubtedly Allu Arjun and his performance. Bunny is top notch in both his characters as Duvvada and Dj. But he is the best when he becomes Duvvada as his diction, comedy touch and mannerisms are hilarious. The star hero carries the entire film on his shoulders and makes the film watchable which has an otherwise routine storyline.

Pooja Hegde is yet another star attraction for the film. She looks drop dead gorgeous and will be an eye candy for the youth and masses alike. She matches equal steps with Bunny and her chemistry with the star hero is just awesome. The first forty minutes of the film has very good entertainment with good doses of comedy.

The climax of the film is quite comical and has been handled well even though it looks a bit over the top. Subba Raju is impressive in his role and evokes good comedy. Rao Ramesh emulates his dad, Rao Gopala Rao from Aa Okkati Adakku and does his best.

Like in many other movies of late, the second half of the film is quite weak. There is hardly any story to tell here and director Harish Shankar makes the villain’s track a bit weak during this time.

Bunny’s fans would a be a bit disappointed as their star hero has not danced to his full capacity in DJ. The length of the film is also a bit high and has a lag in many areas and gets predictable and routine most of the time. The hero-villain tug of war is not that gripping.

Production values by Dil Raju are excellent as he has spent a lot of money and it shows on screen. DSP’s music is decent as all the songs have been inserted cleverly into the proceedings. Background score is very impressive and elevates the film well. Dialogues by Harish Shankar have a lot of tongue and cheek humor. Editing is quite weak as at least 10 minutes of the film can be trimmed easily.

Coming to the director Harish Shankar, he has done a decent job with his execution. He has written Bunny’s character quite well and his intention behind the protagonist’s fight for the society is also good. But he too disappoints during the second half as he dips the proceedings with some below average execution. But credit should go to him for showcasing Bunny in a powerful manner and also ends the film on a happy note.

On the whole, DJ is an out and out Allu Arjun film to the core. The star hero is a major attraction and carries the film with his energetic performance. Pooja Hegde’s glamor, good comedy, and some mass elements will go supremely well with the masses. Collections wise, this film will do quite well as there is no big film coming up in the near future. Finally, if you ignore the routine story line, lag in the second half and keep your expectations in check, DJ ends up as a good watch this weekend.