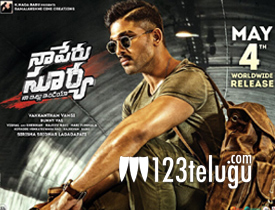 Allu Arjun’s Naa Peru Surya has been in the making for quite some time now. The film marks the debut of writer Vakkantam Vamsi as the director of this patriotic drama. After a huge round of promotions, this film has hit the screens today. Let’s see how it is.

Surya(Allu Arjun) is a passionate army officer who gets suspended due to his short-tempered attitude. He is given an ultimatum that if he needs his job back, he has to get a certificate from India’s biggest psychologist played by Arjun. But the twist here is that the psychologist is none other than Surya’s own dad whom he had left years back because of personal issues. Rest of the story is as to how an aggressive Surya confronts his father, manages his anger issues and the corrupt society which is filled up with a lot of bad people.

Right from the first frame, it is Allu Arjun and his stunning act that steals the show. Bunny’s aggressive actions and impressive screen presence brings a lot of depth to the proceedings. Bunny is at ease with his performance and nicely gets into the character of a man with serious anger management issues. As usual, he dances well and plays it to the galleries with his fights.

Senior hero, Arjun does his role to the best of his qualities. Vennela Kishore evokes few laughs here and there in the latter half. Yesteryear heroine, Nadhiya impresses with her acting in her limited role.

The interval bang is pretty decent and the way all the patriotic scenes are executed look good. The first fifteen minutes of the film featuring the army backdrop is quite gripping and have been executed well.

After the gripping first fifteen minutes, things sidetrack a bit as the story wanders here and there. Things get set and the actual story kick starts only during the half point. All the episodes between Arjun and Bunny do not elevate enough emotions and look forced.

One mass number that comes during the end, disturbs the flow of the film. Even though the climax looks good it has been dragged a bit long with unnecessary scenes of villains. The film is filled with too much of preaching about the country which gets a bit boring at times.

Production values of the film are top notch as the army setting looks quite realistic. Music by Vishal Shekhar is pretty okay but their background score is awesome. The manner in which they elevate the character of Surya looks top notch. Dialogues are decent and so was the production design. Editing is below par as many scenes in the climax could have been easily toned down. Allu Arjun has been styled quite well in the film.

Coming to the director Vakkantam Vamsi, he makes a decent debut with the film. His script is novel as the plot of flighting one’s own enemy is quite good. He starts the film well with good confrontation scenes between Allu Arjun and Boman Irani in the army backdrop. But he loses his grip after that as Arjun’s episode does not give that needed effect. The way he has given a tribute to the Indian army is good but he makes the film a bit preachy at the end. Had he narrated the film in a more crisper manner in the second half, things would have been good.

On the whole, Naa Peru Surya is patriotic drama which is deals with the subject of fighting your own anger and using it in a right way. Allu Arjun leads from the front with his career-best performance and carries the film on his shoulders. But things get slightly dull because of the lack of entertainment and the message given looking a bit dragged during the second half. If you ignore the above-said things and want to watch a different and serious subject based on the life of a soldier, you can give this film a shot. But keep your expectations in check.