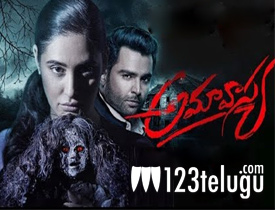 Sachiin J Joshi, who is struggling to deliver a proper hit since a long time has come up with a film called Amavasya. Touted as a horror thriller, the film is open for public viewing today. Let’s see whether this film gives Sachiin his much-awaited success or not.

Sachiin Joshi(Karan) and Nargis Fakhri(Aahana) are a couple who go on a vacation to Karan’s old Mansion which is located at a faraway place. Soon after reaching there, they experience unexpected incidents in the house. After a while, Aahana finds out that her boyfriend is getting badly affected by the weird atmosphere in the mansion. In that process, she comes to know that the soul of a girl called Maya is creating problems. Who is Maya? What is her back story? Does her flashback have any connection with Karan? To know this, you have to watch the film in the theaters near you.

Looks wise, Sachiin J Joshi is okay and tried to present himself in a new way on screen. Nargis Fakhri as a true lover of Karan did justice to the given role. The girl who portrayed Maya’s character is cute and did a decent job in her purposeful role.

Mona Singh as a medical consultant and Vivan Bhatena as a narrow-minded guy are good in their roles. A few suspense elements in the first half are executed on a decent note.

One of the biggest minus points of the film is the beaten to death storyline which we have seen in numerous films. Coming to the narration part, barring a few horror episodes, the film runs on a dull note.

The last twenty minutes of the film is a big letdown as too many twists with various subplots irritate the audience. The mysterious factor revealed in the second half is not handled properly.

Tanya Pathak and Jody Medland tried to cook a tasty dish by writing the screenplay to an age-old storyline but it turned out as a big mess. Director Bhushan Patel does a poor job as his work is not at all impressive. Editing by Deven Murdeshwar is okay. Cinematography by Amarjeet Singh is good as he captured night visuals nicely. Background score for this film is fine and two songs which come in the first half are visually good. Production values by Sachiin Joshi’s home banner are rich.

On the whole, Amavasya is a suspense thriller which fails big-time to engage the audience. Except for one or two horror scenes, the film offers absolutely nothing new and irritates you to the core. All we suggest you is to skip the film this weekend and look for better options.