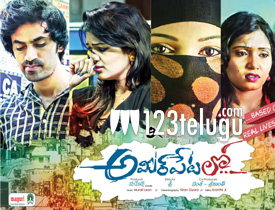 Ameerpetlo has been creating a decent buzz off late with its unique posters and realistic content. Starring mostly newcomers, this film has hit the screens today. Let’s see how it is.

The story of the film is based on the lives of four friends who land in Ameerpet to kick off their professional struggle like any other freshly passed out students.

The entire story of the film is about how this young group gets carried away in the fast lives of Hyderabad and finally understand their mistakes and do something good for the society.

The realistic nature of the film is interesting. Rather than choosing some cheesy adult comedy, the makers have shown how girls get exploited to the surroundings and change themselves.The love track between the lead pair is somewhat decent.

The new heroine, Aswini is the major attraction of the film as her looks and decent performance is quite impressive. The message which the director gave, in the end, is also okay.

The comedy scenes such as the software guys faking their resumes and getting caught have been executed well. The first half of the film has some decent moments and is well set at least till the half way mark.

One of the biggest drawbacks of the film is the casting. Except for the lead pair, none of the actors suit their roles one bit. There are many scenes in the film where the actors ham to no extent and irritate the audience. The overaction is at its peak level that the interesting subject and plot is sidelined.

One love track where the boyfriend is tired of his girlfriend making him talk for hours on phone is outright silly. There are many scenes like these which can get to you most of the time. As soon as you think that some realistic scenes are being showcased, the film gets monotonous and boring with cheap comedy and lackluster scenes.

Also, there is no conviction in how the things are ended. Though the film starts on a funny note, with not much clarity, it takes the route of charity and does not give the necessary effect.

Production values seem to be okay in parts. The film needs serious editing as they are many silly scenes which can be chopped off during the second half. The screenplay is okay during the first half but gets sidelined during the later part. The camerawork is decent and so were the dialogues. Music is decent and so was the background score.

Coming to the director Srikanth, his subject on paper sounds very good. But it was his weak star cast and out dated second half which brings the film down. Had he ended the stories in an interesting way and made things a bit believable, things would have been even better for the film.

Ameerpet Lo has some decent moments as long it displays the harsh truths of what happens in the bylanes of one the most popular areas of Hyderabad. But things go haywire when it starts getting preachy and message oriented. A major section of the youth may identify with the story line but for others, things can get quite routine and tedious.