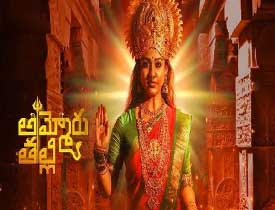 Ammoru Talli is a film that has created a good buzz in the recent past. Starring Nayanthara and RJ Balaji, this film is out on Disney Hotstar. Let’s now see how it is.

Ramaswamy(RJ Balaji) is a man who has to deal with many family problems after his father leaves his family. He is a small-time reporter who is working on a case related to a scam that is being done by Bhagavathi Baba(Ajay Ghosh). This is the time, his family deity, Ammoru Talli(Nayanthara) appears before Ramaswamy and changes his life. Who is this Ammoru Thalli? What changes did she bring to Ramaswamy’s life? That forms the rest of the story.

Nayanthara is the heart and soul of the film. She plays the goddess Ammoru Thalli and perfectly suits the character. Nayan is regal and brings a good effect on the film. Her costumes and makeup have done so well.

A seasoned actress, Urvashi also does well in his role and provides some comedy relief. RJ Balaji is amazing as a young reporter. All his scenes with Nayanthara have been executed well. The manner in which fake Baba’s are ruling the roost in India has been exposed well.

A few satires dealing with the way babas even run political parties were also neatly addressed. Ajay Ghosh is loud but has done well as Bhagavathi Baba. Nayanthara’s comedy timing has also been generated well.

Some scenes in the film are heavily inspired by movies like Oh My God, and PK. The religious thread and how fake babas operate has been showcased in many films already.

The film starts on a good note as RJ establishes the story quite well. The entry of Nayan and how she gets involved in the plot is also neat. But from there are many logics which go for a toss in the second half.

The interview between RJ Balaji and Ajay Ghosh looks a bit over the top. Also, there are some comedy scenes in the second half that do not create any effect and look forced.

The background score of the film is pretty good and the tunes used for the climax is also decent. VFX done for the goddess setup is also good. Production values are superb and the Telugu dubbing is also pretty good. The dialogues and those which are written as satires for fake babas work well.

Coming to the director RJ Balaji, he has done a passable job. He took a story that is quite routine and added comedy to it. But in this, he missed the essence in the second half.

On the whole, Ammoru Talli is a satire on how fake godmen operate in the country. The story is quite routine by actor and director RJ Balaji adds decent humor in the film and makes it interesting. The second half goes down a bit but Nayan’s screen presence makes this film a passable watch this Diwali weekend.