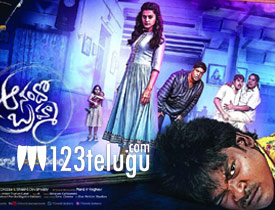 Continuing the trend of horror comedies, yet another interesting film which has hit the screens today is Taapsee’s Anando Brahma. Let’s see how much does it impress.

After the death of his parents, a Malaysian based NRI(Rajeev Kanakala) decides to sell off his ancestral home. He assigns this job to a real estate agent who in turn creates a rumor for his own good that the house is haunted. Overhearing this discussion in a bar, a small time waiter(Srinivasa Reddy) requests the NRI that he will prove to everyone that there are no ghosts in the house and if proved, he gets 20 % commission.

Rajeev kanakala agrees to this and the waiter makes a plan and approaches three other losers in the form of Vennela Kishore, Tagubothu Ramesh and Shakalaka Shankar. Somehow, he convinces them for a good deal and heads to the house. What will happen to these four? Are there really ghosts in the house? and where does Taapsee feature in this setup? That forms the rest of the story.

One of the interesting factors of this film is the unique concept of ghosts getting scared of common people. This concept has been nicely interlaced in the script through four different characters which are ably performed by all the leading comedians. Srinivasa Reddy heads the gang and is spot on with his mannerisms and witty dialogues.

While Tagubothu Ramesh plays his trademark drunkard role superbly, Vennela Kishore is hilarious as the blind man. In many of his scenes with Srinivasa Reddy, Kishore’s humor will leave you in splits. Last but not the least, Shakalaka Shankar has become a pro in horror comedies and in this film too, he plays his role perfectly. The way he spoofs all actors and the fun generated through it is too good.

It is good to see Rajeev Kanakala in a very important role after a long time. Taapsee does not have much to do but suits her role well and does what is required. The second half, in particular, has hilarious comedy and the way the film has been ended also looks decent.

There are not many drawbacks in the film but the first half is a bit bland. It is neither interesting nor boring as all the characters are introduced one after the other with their flash backs. Even though it has short run time, too much time is taken to establish the story.

The makers should have got into the story in the first half itself and added some comedy elements which would have made a world of difference to the film.

The film is made on a very small budget but looks pretty neat. The camera work and visual effects are decent. Dialogues are hilarious and have been written with a lot of wits. The screenplay is the biggest plus as the film is narrated with simple and one point agenda which is fun. Background score is decent and does not make the film loud.

Coming to the director Mahi, he has done an impressive job with the film. His concept is neat and he does not experiment and narrates the film in an entertaining manner. He scores full points by writing superb characters for all the comedians. The way he evokes performances from them and ends the film with a good twist and emotions looks nice.

On the whole, Anando Brahma is a neat horror comedy which has some hilarious fun during the second half. The film has been cleverly laced with entertaining episodes that will surely leave you in splits. Outstanding performances by all four comedians and short run time are huge assets. As the film is made on a tight budget, the makers will surely see profits. Finally, If you ignore the simple first half, this film will surely make your weekend quite enjoyable. Go watch it.