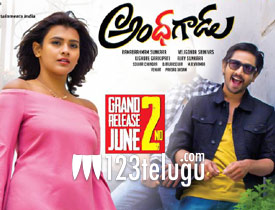 Raj Tharun has become a minimum guarantee hero in Tollywood as all his films are being awaited quite eagerly. His new film, Andhagadu has released today and let’s see how it is.

Gautam(Raj Tharun) is a blind man who falls in love with a doctor named Netra(Hebah Patel). As time passes by, Netra helps Gautam get his eyesight back. This is also the time when Gautam falls into trouble with a local don(Raja Ravindra).

His problems get worse when Gautam faces severe consequences from Netra’s dad(Shayaji Shinde) who is a police officer. Just when things look set, Gautam meets Kulkarni(Rajendra Prasad) who turns his life upside down.

Who is this Kulkarni? What does he have to do with Gautam? How will Gautam win his love and face the local don? To know all the answers, you need to watch the film on the big screen.

You can clearly see a lot of improvement in Raj Tharun. His star status is surely taken the next step as he is at ease with his performance. He is especially hilarious as the blind man and showcases good variations when he becomes the angry young man during the end.

Comedian Satya brings good laughs during the first half as all his scenes with Raj Tharun and Hebah evoke superb fun. Hebah Patel is just about okay and does not have much to do in the second half. As always, Hebah’s chemistry with Raj Tharun is quite rocking. Ashish Vidhyarthi is decent as the doctor and so was Sayaji Shinde.

The first half is very entertaining with hilarious entertainment and a very interesting interval bang featuring Rajendra Prasad. The way hero’s secret is revealed during the end has also been showcased well.

The film has a roller coaster kind of a feel. Right, when you think things are going good in the first half, the pace falls down slightly and the film is only saved by some good interval point. Most of the films these days have a very predictable and below par execution and same is the case with Andhagadu too.

For the actual secret to be revealed, the director unnecessary sidetracks the second half by some boring comedy scenes between Rajendra Prasad and Raj Tharun. Probably for the first time, Rajendra Prasad looks quite dull in his role and does not bring any depth to the proceedings.

Once the twist is revealed, the climax takes forever to be wrapped up as some unnecessary scenes showcasing Raj Tharun’s heroism are dragged for no reason.

Production values by AK Entertainments are top notch and so was the camera work. Music by Shekar Chandra is quite impressive as all the songs sound good and have been shot well too. Dialogues are good and so was the entire set up of the film. The film needs serious editing as many scenes between Rajendra Prasad and Raj Tharun can be easily trimmed.

Coming to the writer turned director Veligonda Srinivas, he has done just an okay job with his debut film. As a writer, he scores full marks as his script is quite interesting on paper. But the problem lies in his execution. He packages the first half with some good masala elements but does not manage to hold the grip during the second part. It is only during the last 15 minutes that the film raises to its strength with an interesting twist featuring the hero. Other than this, he sends the second half crashing.

On the whole, Andhagadu is a film which starts off with superb fun but gets sidetracked during the later stages. Good entertainment in the first half and Raj Tharun’s performance are some assets. If you ignore the slightly slow and dragged out second half, the last fifteen minutes and other twists in the film make Andhagadu a time pass watch this weekend.